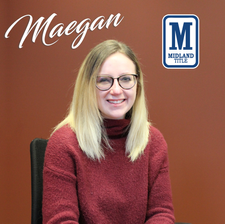 Maegan started with Midland last October as a Closing Assistant and now helps with many aspects in the escrow department from scheduling to post closing.

Maegen will be graduating from BGSU in May and will start the MBA program at UT immediately. She volunteers for BGSU's Mortar Board and a local women’s shelter. She loves coffee shops as well as painting with watercolors and acrylics. She loves to read and owns over 400 books.

•Maegen would love to travel back to Paris during the 1920s to witness in history where so much art and books were created – plus Paris hosted the 1924 Olympics!

•Maegen loves The Office so much she's re-watched the series at least five times. Pam is her favorite character.